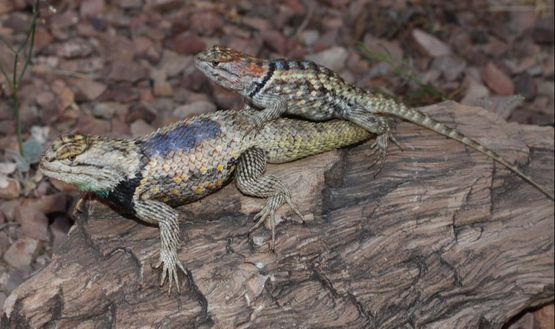 A central goal of evolutionary biology is to explain how complex phenotypes can diverge between the sexes, even though males and females share an autosomal genome. In fact, closely related species can differ in the direction and magnitude of sexual dimorphism, as well as in the trait combinations that exhibit dimorphism, suggesting that species regularly overcome the constraints imposed by a shared genome. Differentially expressed sex steroids are a major mechanism that might explain this phenomenon, yet we lack a thorough understanding of how these hormones regulate development and how they may facilitate or constrain the evolution of sexual dimorphism. My research addresses these questions by examining both how selection acts upon dimorphic traits and the mechanisms regulating the expression of sexually dimorphic traits.  Current research is focused on understanding 1) how patterns of sex-biased gene expression vary among species with alternate patterns of sexual size dimorphism, 2) how the regulation of sex-biased gene expression is modulated across the tree of life, and 3) the genomic consequences of sex-biased gene expression. This work was recently funded by the Physiological Mechanisms and Biomechanics Program in the Division of Integrative Organismal Systems, the Evolutionary Processes Program in the Division of Environmental Biology, and the Rules of Life Venture Fund of the Emerging Frontiers Program in the Directorate for Biological Sciences at the National Science Foundation.